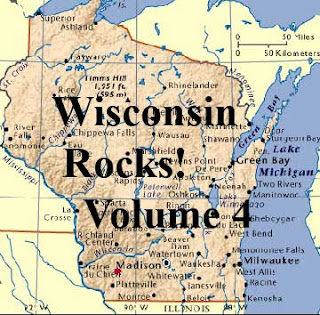 Volume 4 is a hot one! This volume contains the earliest Cuca Records/Swastika Records release.
Along with bands from the same time period 1957-1962. This volume also contains The Fendermen's very first version of "Mule Skinner Blues",released in 1960. The story about Swastika Records and Willie Tremain's Thunderbirds "Frankie's Rock"is an odd one. I spoke to Jim Kirchstein owner/knob twiddler/engineer of Cuca Records,and Swastika Records label and name was just done without much thought,and no real meaness meant. He came up with the logo and name simply because he was living around a lot of people who spoke German,and lived in a small community of German ,Swiss,and other European families. It was common that most people who lived in the smaller towns spoke fluent German at home, and he did it thinking it wouldn't hurt anyone,and possibly just for a minor joke. He also noted that the Swastika logo was a good luck sign.
The problem with it, is that it wasn't really a joke,and when Jim wanted to press more records at a Chicago RCA Record pressing plant, they were a little uncomfortable with the label name and logo, and while ordering his next batch of records quickly dropped the Swastika Records logo and name right there and then. While he was on the phone ordering the records he quickly came up with the Cuca Records name and from then on, was the label's name. Now, these days, the original label and design of the Swastika logo is highly collectible, and noted as an oddity.
Jim isn't so proud of this fact these days, but you know you do crazy things when your just starting out, he says. He didn't think it would bother people at the time. Without a doubt,it is one way to get noticed! How else are you going break into the music market, and get your records played.
Cuca Records was a small one man operation, and never tried to use payola to get the records played on the radio Jim sent out records all over to radio stations to get played, and did whatever he could. The story is The Fendermen record was broke in small market radio and then grew from there to be one of the biggest, out of nowhere songs of 1960.
And it was all somewhat accidental! In December of 1959, a record salesman named Ron Straussburger stopped by Jim's label with a tape,and Jim set it aside for the holiday season,not thinking much of playing it. Ron asked Jim to consider releasing this tape on a 45 rpm record.
Jim rediscovered this tape left there on his shelf,in January of 1960,and heard the novelty rockabilly song "Mule Skinner Blues". He recognised the song being a version of a Jimmie Rodgers song from 1930 called Blue Yodel No. 8. The Fendermen duo recorded their version of this song in their basement,and that's what Jim had on his tape. Well, it was a great version of this song, updated complete with yelps,screams,and howls. Jim thought it could be a potential hit and released it,as Cuca label number 1003 and sent few copies here and there for radio play, with a note saying "This is new,we're small, Please give it a listen" The Fendermen got their break, from radio stations, in La Crosse, Wisconsin and other small market radio stations in midwest towns,radio listeners loved the song! Jim says "it simply grew from requests from listeners calling in loving the song", and that's the story. The song "Mule Skinner Blues" got as high as number 2 in the Billboard Charts that year.
Enough for Cuca Records to get established,noticed and able to put out more records.
And Jim Kirchstein ran the label from 1959 to about 1973 or so. So many bands from Wisconsin recorded at the Cuca label it must be mentioned a lot here on this blog. If it wasn't for Jim and his label,many bands would never have gotten to record and make singles in the 50's,60's,and early 70's.
And here's the tracks on this particular volume:

There's a lot of other very strong tracks on this volume:
The Noblemen are a fabulous mixture of novelty/ instrumental
"Dragon Walk" is one of my favorites! It has this wonderful sleazeball
sax weaving in and out of the song! It's nuts! Music to strip to!
The Teen Kings deliver the goods with "I Might Have Known" a
fine rockabilly song that came out on Cuca's sister label Sara Records.
The Zakons,from Green Bay,who I mentioned before with also a fine
instro called "Wasted", a cool early doo wop song by The Soul Brothers
From Milwaukee called "What Did She Say". Other faves include:
The Tornados (From Woodruff,Wisconsin) instro
"Scalping Party"complete with war whoops and hollers! Excellent!

The earliest Wisconsin rock 'n' roll song ever recorded is on here too!
The White Caps (From Appleton,Wisconsin) with "Rock 'n Roll Saddles"
from 1957! Wow! Where else are you gonna hear this????
I also love Gary Lane & The Mad Lads from Milwaukee,
"Henrietta" is a real shouter! (also released on Cuca Records in 1964)
Scottie Stuart's "Nightmare" is also really fun rockabilly number.
That song came out in 1960,and Scottie was from Madison.
Just listen to the cool rocking guitar! Why didn't that become a hit?!
It's complete with screaming and hollering!
I also love the Bonnevilles (From Waukesha) "Sky Dive" from 1960.
Another wonderful sax fueled instrumental rock song that shoulda
been a big hit!
I don't know about you, but this is a real great disc hipsters!
Dig it, Dig it right here! Don't forget to tell me what you think
of it,leave a comment, scream,holler!
Wisconsin Rocks Volume 4
Posted by stephanie rocks at 1:35 PM

Thanks for all of these. Love it!!

Great, great job on these. Almost makes me wish I was from Wisconsin.
Especially enjoy your comments about the music.

Another great collection (I like "Scalping Party" the best). Thanks for the work you have done in putting these together.

Jim:
YOU can pretend you're from Wisconsin,get a map and learn how to pronounce the silly Indian names of the cities.I could add a few other things,but I deleted them...they were funny though...funny perhaps only to me.

Great, great blog. Appreciate all your hard work in giving us these great compilations. And as for siilly Wisconsin town names, I'll always take Oconomowoc on beautiful Lac LaBelle . . .

Although from a later era, anyone have a great Wisconsin single, "Salty Tears" by Semi-Twang, by any chance?

Thanks again for all the work here. Eat cheese or die!

Jon: no Semi-Twang on these it's strictly old-style 1957 to about 1982 or so,and it's made by someone else who preferred that time line. This is staying with the historical theme here.

Maybe I can post some of that Semi-Twang at a later date.

Great stuff, but does anyone have a label shot of the Swastica records pressing of Muleskinner Blues?
I'd love to see one.....

Yeah I have a copy/scan to show you,but Hound,doesn't that scream naughty to post it on here?
It might piss some people off...wouldn't it?

It's not Muleskinner that had the swastica label it was Frankie's Rock By Willie Tremain's Thunderbirds.

Ah yes, I remember when Semi-Twang signed with Warner Brothers... John Sieger is back playing the Milwaukee area again after many years away to Nashville. I bet he's got a lot of stories about the Mixed Blessing that is a Major Label Deal... I bought the LP when it came out, and picked up a copy of the CD when it was cut-out a few months later. Gotta see where that R&B Cadets album is in my pile-of-records-to-digitize... Didn't they have a 45, too, or was that Cebar?

Stephanie, do you have Soup's LP on Big Tree (Album Soup) in your collection? 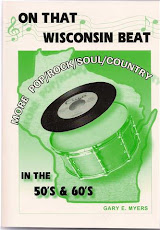 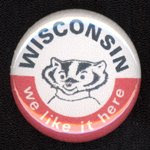